Poor Heidi Klum! Yes, you heard me right. Heidi Klum, supermodel, fashion icon, QUEEN of Halloween, and all around perky, German style icon just confessed that she and her kids recently had lice. And she did it on a talk show with millions of people watching. Bravo!

I said “poor Heidi” not because her family had lice, but that might be a good reason. I didn’t say “poor Heidi” because she was devastated by the event. She wasn’t, she had a sense of humor about it. “Poor Heidi Klum” is just that because she and her kids were labeled and ridiculed on national television because of host Ellen DeGeneres’ ignorance. (Ellen is not the only guilty one out there.) 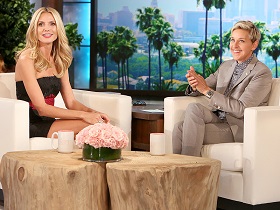 You see, Ellen was pretty skeeved by the whole idea of lice, and did not hide it well. Not only that, but after hearing this was the Klum clan’s second head lice infestation, Ellen actually did something pretty mean (IMHO); she asked Heidi, “Do you bathe? . . . Why are you booked here today? I don't understand.” Heidi gracefully continued her tale, laughing off Ellen’s barbs, and explained that she hired some lice removal professionals come in to solve her problem. Watch what happens here:

Now we can all understand that lice are not a popular house guest, but people who lice-shame or lie about their families even having it become part of the problem. By now just about everyone should know that lice are not something a person gets because of socioeconomic or hygienic reasons – ANYONE can get lice, people. ANYONE! Younger kids are the usual victims, but only because they are so snugly and friendly and unafraid to get close to their friends, family and teachers. Myths about who gets head lice are part of the problem, too.

Some people are afraid to inform friends, relatives, schools, playmates, etc. about an infestation, even when they have effectively treated the problem, because there is a stigma associated with having head lice. This stigma, and the resulting fear, teasing, whispering, and even bullying, perpetuates head lice.

Let’s think about Mrs. Ima Too-Proud and her child who she discovers came home with lice. Ima treats right away (which is great), but she thinks because her family is now lice-free, it’s fine to keep quiet about it. Here’s why it’s not: 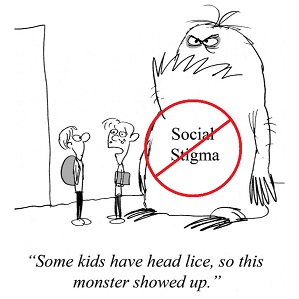 If, one by one, parents would stand proud (or at least honest, like Heidi) and spread the word, then the spread of lice would be significantly reduced. If parents and educators would explain to their children that head lice, while annoying, are not something to be ashamed of, then maybe people with enormous influence, like Ellen DeGeneres, wouldn’t perpetuate the stigma of having head lice that currently exists.

If head lice is affecting so many kids (6-12 million annually), don't you think it's worth talking about and demystifying? Schools teach about health topics from nutrition and hygiene to sex ed and fire safety. Why not teach about head lice? It doesn't have to be a big deal. Really.