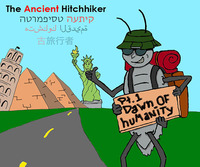 The history of head lice (Pediculus humanus capitis) is one that reaches back as far as our own. That’s right, head lice are an ancient pest that have just sort of always been here. And not only have they always been here, but they have evolved right alongside of mankind, further proving that these little buggers are simply one of the hardest parasites to be rid of.

Today, there are three incredibly similar Clades (classifications that share similar features) of head lice. At the dawn of mankind, there was just one master clade of lice, Clade A (as it is commonly referred to).

Based on the timeframes and geographic location of where these evolutions took place, it is believed that C evolved along with Homo erectus, B packed up and left with the Neanderthal, and that A (the original) hedged its bets and stayed on the scalps of Homo sapiens. Fast forward a million or so years and Clade A is the most common louse found on people’s heads nowadays. That’s because they put all their chips in on Homo Sapiens, the winners of the great evolutionary footrace.

With me still? Sort of? Okay, well don't worry, because it can get a little tricky. Check out this little cartoon infographic. Maybe that'll help =>

Aaaanyway, all this was just the beginning though. Back during the early early days of human evolution, it is believed that our ancestors were covered head to foot in hair. This provided lice with a free-range, 24 hour, all you can eat, buffet. The louse life wasn’t too shabby, but a major human invention would soon change everything….

Roughly 170,000 years ago, it is theorized the first clothing designer was born. After a successful hunt, some man or woman out on the plains of Africa decided to wrap themselves in animal furs and take their first strut down runway. I’m kidding about the “fashion designer” bit or course, but it is true that around this time, mankind had created clothing. It was just more of a practical decision as opposed to a fashionable one.

At that point in history mankind had begun branching out from Africa and into colder climates. These people were not as scruffy as their predecessors, so they were required to wrap themselves in furs to survive the changes in climate. While this opened up amazing travel opportunities for humans, it had the opposite effect on lice.

Mankind was no longer limited by the need for warm temperatures so people began traveling the continent and beyond. This had the reverse effect on lice because now they could no longer travel to every part of the body through the hairy infrastructure they had been used to. It could be argued that this was when Pediculus humanus capitis truly became head lice.

The louse's greatest attribute however, just like mankind it would seem, was the ability to adapt. It was around this time when a new species broke off from the previously mentioned three clades. Enter Pediculus humanus humanus, or more commonly known as body lice.

Engineered by evolution, this new spinoff could cling to clothing, feed when it was in contact with the human body, and then scuttle back to the clothing for safety. The body louse will prove to be a huge game changer to human history as time goes on. In fact, head and body lice alike will come to have a hand in ancient Egyptian burial practices, European journeys to the new world, and the fall of Napoleon’s great army.

But those, my friends, are stories for another time. This has only been the beginning. There’s still plenty of history to be told from the standpoint of our oldest and itchiest companions. Make sure to check back with us and and keep an eye out for the next addition in our Ancient Hitchhiker series.

Written and cartooned by Dave Caswell