School has begun for everyone, and invasions of head lice have already been reported across the country. Lice awareness has been heightened by the recent onslaught of media coverage of a research study presented at the 250th National Meeting & Exposition of the American Chemical Society in August 2015. The findings showed that in 25 out of 30 states where samples were tested, the lice had genetically mutated and become highly resistant to pyrethroids. Michigan was the only state where these insecticides remain effective, while four other states’ lice samples were somewhat vulnerable to them.The mutated lice, virtually unaffected by the drugstore treatments, have been dubbed “super lice.”

While schools and parents alike are incredibly sensitive to topic of head lice infestations, they they are not always in agreement of how that should be handled. School administrators take their cues from medical associations such as the National Association of School Nurses (NASN) and the American Academy of Pediatrics to determine school policy. 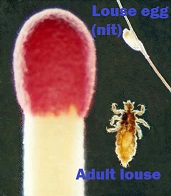 The National Association of School Nurses revised their position on head lice in 2011 saying that children with head lice shouldn’t be barred from attending school – but rather they should “be discouraged from close direct head contact with others.” Further, the NASN concluded “The school nurse is in a position to take the lead in eliminating school exclusion policies and, instead, incorporate evidence-based practices that reduce the stigma associated with head lice, and work to increase classroom time with an emphasis on keeping students in school.”

More recently, in April 2015, the American Academy of Pediatrics issued a similar statement that “the AAP continues to recommend that a healthy child should not be restricted from attending school because of head lice or nits (eggs).” The AAP’s position claims the common “ No Nit Policy” in schools (requiring infested children to stay home after treatment until they are totally free of lice as well as their eggs).

Following the AAP’s recommendation, despite parental resistance, some schools opted to abandon the “No Nit Policy” to minimize time away from the classroom and avoid the possibility of students’ feeling “singled out” and humiliated – which can result in taunting or bullying from classmates. The subsequent release of the report on the prevalence of “super lice” has given proponents of the “No Nit Policy” leverage, resulting in schools reinstating the policy.

With an estimated 6 million to 12 million head lice infestations occurring annually in the U.S. among children ages three to 11 years, according to the Centers for Disease Control and Prevention (CDC), head lice are parasites that have no economic or geographic skews. The number of cases is significantly higher if infested family members are included espeaially since super lice treatment can be so tricky.

With head lice statistics in mind and the hope to reduce the incidence of lice among their students, a greater number of schools have begun to employ the services oflice treatment businesses. One such business, Lice Treatment Center® has just finished its first few rounds of back to school visits.At the beginning of the school year, as well as upon students’ return following seasonal vacations, LTC® certified technicians perform head checks for all students upon arrival, treat those with head lice infestations and provide education for faculty, students and families on how to prevent future infestations.

Liz Solovay, co-founder of the Monroe, Connecticut-based Lice Treatment Center®, emphasizes that education about prevention and control is critical.

“Our school clients understand the importance of parents and teachers being proactive in helping their children understand that contracting head lice has nothing to do with anyone’s degree of personal hygiene or social status. Children should also be made aware that if precautions are taken, exposure to head lice can be greatly reduced,” says Solovay, adding that talking to our children about prevention should be a regular before-school-starts ritual.

Solovay encourages parents to share the following lice-prevention tips with their children before or soon after the start of school:

Parents should also be aware that conducting regular head checks and using effective, all-natural shampoos, conditioners and other products designed to repel lice will further decrease your chances of a head lice infestation, without exposing family members to unwanted toxins.

Ultimately, “super lice” or not, the fact remains that no one wants to deal with a head lice infestation. Awareness, education, and vigilance are the best defenses any parent, school, or camp has in the prevention of head lice.