So I took two of my kids to get their hair cut the other day and I figured it would be the usual routine: my 4 year old son wiggling in the airplane seat trying to avoid the clippers and my 8 year old daughter sitting patiently as the stylist worked on her. I was wrong. Not about my son, he was wiggling for sure, but Denise had everything under control. My daughter was sitting still, looking a little apprehensive about going with a short do, but Megan had a concerned look on her face when I glanced over to see how the pixie transformation was going. She motioned me to come over. She leaned in. I leaned in. 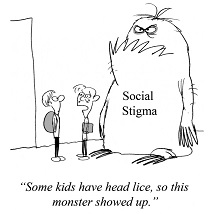 Megan asked quietly, “Has she ever had lice?” I said even more quietly, “No, but I work for Lice Treatment Center® .” I told her about our pediatrician formulated, all natural products. Granted, that didn’t answer the question, but it bought me some time . . . to panic. I looked at my daughter’s head as Megan parted her hair in back. I saw nothing. Again, she combed through and we both saw some white specs. She said, “See?”

Egads, I thought. Even though I work for Lice Treatment Center® and I do head checks on my kids’ regularly AND use the Leave In Hair Tonic to ward off any meandering parasites, but I suppose it could be possible. I mean, it is back to school season. She did go to a birthday party last weekend. And what about all the reports in the media about super lice ? Oh crap! No.

Okay, I continued to look with her, trying to appear casual, you know, so as not to attract any attention from the other parents there. We didn’t see any critters, but those white specs were troubling. What if they are lice eggs? She’s back in school, but they have a no-nit policy even after treatment (which is unnecessary, even ask the American Academy of Pediatrics). She would have to stay home. With me. Right after summer ended and I regained some quiet time? No. Just no.

Megan didn’t see anything else either, just those unidentified white specs, so she said she would finish her haircut. What? It didn’t even occur to me that she wouldn’t, so I was relieved. Megan took her time, didn’t flinch, and carried on. 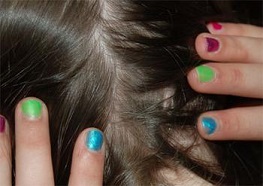 So what did I do next? I took the kids grocery shopping, as planned. Then, when we got home, I let my daughter know that I was going to do a more thorough head check. She wasn’t itchy before, but talking about it made her scratch. And me, too. Oddly enough, many people don’t even know they have lice until well after they have been hosting the little buggers. A ‘lucky’ few aren’t even affected by the blood suckers and their itch-inducing saliva.

Back to the search. I found nothing. Good, but not good enough. I lathered her up with LTC’s Jolis Cheveux™ Lice Treatment Shampoo . We actually had fun playing with her newly short hair, turning it into a foamy mohawk, making her a kewpie doll, giving her horns. We laughed. I prayed silently. We waited, then rinsed.

I applied the Jolis Cheveux™ by LTC Lice Treatment Conditioner . . . and then combed, wiped, combed, wiped, repeated (ad nauseam). I still found nothing. No lice. No nits. Nothing. I combed and combed some more, just in case. Nope. No head lice. No lice eggs. She sat with the conditioner on her hair and watched Netflix.When the timer went off, we rinsed. Her hair was clean. We blew it dry, which took FOREVER. I checked her hair again once it was dry, and smooth, and shiny. No bugs, no white specs, no sticky nits to pull off strand by strand.

I have to say that no matter how much you know about lice, the mere suggestion that your kid might have it will still sends shivers down your spine. The whole week following our scare, I checked her head and my other kids’ heads nightly. I keep the Jolis Cheveux® daily prevention spray on hand for our morning routine. My 4 year-old still loves getting his ‘hair gel,’ so I’m thankful for that.

While I am extremely grateful that our stylist was aware of what to look for, and told me, I am a zillion times more grateful that my daughter didn’t actually have lice.